"The Language of Flowers"
Short story in the forthcoming anthology Wilful Impropriety, Ekaterina Sedia editor. Constable & Robinson in UK, Running Press in US.

"The Vital Importance of the Superficial"

Link to page at Penguin Books

Nancy Pearl, librarian extraordinaire, had kind things to say about the Kate and Cecy books in her recent MORE BOOK LUST.

On page 85, in the section called Fantasy for Young and Old, she says,

"Three wonderful fantasies/romances just right for teenage girls and like-minded adults) are The Sherwood Ring by Elizabeth Marie Pope, which takes place both in the present and during the Revolutionary War period, and two delightful fantasies by Patricia C. Wrede and Caroline Stevermer that will appeal to anyone who loves Regency romances and Jane Austen. The Wrede/Stevermer titles are two of the longest known to humankind: Sorcery & Cecelia or The Enchanted Chocolate Pot: Being the Correspondence of Two Young Ladies of Quality Regarding Various Magical Scandals in London and the Country, followed up by The Grand Tour: Being a Revelation of Matters of High Confidentiality and Greatest Importance, Including Extracts from the Intimate Diary of a Noblewoman and the Sworn Testimony of a Lady of Quality."

RIVER RATS is an ebook! 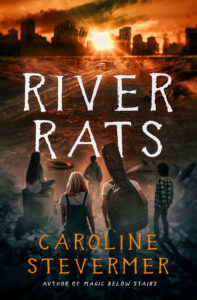 Open Road Media now has on sale ebook versions of three of my early novels, so RIVER RATS is now an ebook!

Tomcat and his friends have a paddlewheel steamboat and travel up and down the Mississippi River carrying mail and performing impromptu shows at the river towns on their route. (Of course, I had to destroy civilization to arrange it for them.)  They have a strict rule against carrying passengers, which is broken a chapter and a half into the book. The rest of their adventures illustrate why that was a good rule.

Published as a YA novel (Harcourt, 1992), these days it might even be considered a middle-grade book. I grew up near Winona, Minnesota, on the upper Mississippi River. Back then, there was a decommissioned steamboat, the Julius C. Wilkie, turned museum there...