"The Language of Flowers"
Short story in the forthcoming anthology Wilful Impropriety, Ekaterina Sedia editor. Constable & Robinson in UK, Running Press in US.

"The Vital Importance of the Superficial"

Link to page at Penguin Books

Nancy Pearl, librarian extraordinaire, had kind things to say about the Kate and Cecy books in her recent MORE BOOK LUST.

On page 85, in the section called Fantasy for Young and Old, she says,

"Three wonderful fantasies/romances just right for teenage girls and like-minded adults) are The Sherwood Ring by Elizabeth Marie Pope, which takes place both in the present and during the Revolutionary War period, and two delightful fantasies by Patricia C. Wrede and Caroline Stevermer that will appeal to anyone who loves Regency romances and Jane Austen. The Wrede/Stevermer titles are two of the longest known to humankind: Sorcery & Cecelia or The Enchanted Chocolate Pot: Being the Correspondence of Two Young Ladies of Quality Regarding Various Magical Scandals in London and the Country, followed up by The Grand Tour: Being a Revelation of Matters of High Confidentiality and Greatest Importance, Including Extracts from the Intimate Diary of a Noblewoman and the Sworn Testimony of a Lady of Quality." 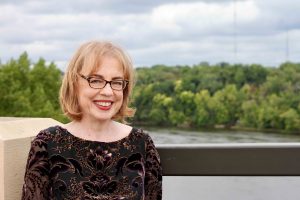 Caroline Stevermer grew up on a dairy farm in southeastern Minnesota, a place where”Were you born in a barn?” was not always a rhetorical question.

Her first few years in school were spent in a one-room country schoolhouse where she was the only student in her grade. Once Minnesota consolidated such schools into the state public school system, she attended grade and high school in Houston, Minnesota.

Her novels A COLLEGE OF MAGICS, A SCHOLAR OF MAGICS, and WHEN THE KING COMES HOME draw from the experience of attending Bryn Mawr and studying the history of art, specifically Elizabethan portrait miniatures.

She has also collaborated with Patricia C. Wrede on SORCERY AND CECELIA, THE GRAND TOUR, and THE MISLAID MAGICIAN. On her own, she wrote MAGIC BELOW STAIRS, a middle-grade novel set in the same world. Her other novels include RIVER RATS and THE SERPENT’s EGG.

Her most recent novel is THE GLASS MAGICIAN, from Tor Books. There will be a sequel.